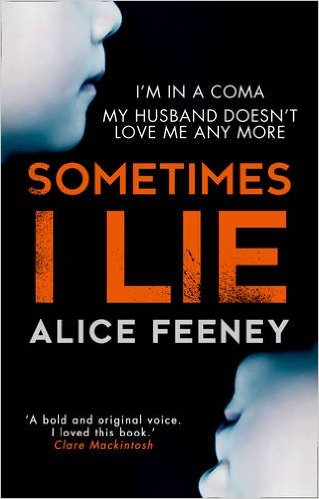 Sometimes I Lie is an utterly compelling, twisted, shocking psychological thriller that made me gasp out loud a number of times as I read it on the tube. It grabs you from the moment you open it and sucks you in. Then just when you think you’ve found your feet, it throws you completely off balance.  The woman who wrote it sat next to me at work in the newsroom for ages and never mentioned the fact she’d been writing a book, let alone that her debut novel had just been snapped up (after a bidding war) for a six figure sum by Harper Collins and sold around the world. Alice Feeney was, until a few months ago, a BBC journalist. She’d worked with us for 15 years. But in the past year she quietly spent any free time she could find writing the book – in her lunch break in between bulletins, or on the train on the way to and from work. I’ve always thought of her as a very good, charming, smiling, calm producer who gets on with her job. But when I read her book I was left utterly baffled because the story she has written is so dark and so unnerving that I was left wondering where it all came from. Think Girl on the Train – it’s that kind of genre – but even darker. Alice claims she read a lot of Stephen King as a child. I’m going to have to believe her.

The cover says everything you need to know about the story. The twists in it are so clever. Just when you think you know what’s going to happen, you are thrown completely off course. I went to Alice’s book launch, where her ‘über’ agent, Jonny Geller (the best in town), announced the book has been snapped up by an American film company and is being made into a TV series. Alice is living a writer’s fairytale – the story so many must dream of. And it couldn’t have happened to a lovelier person.

2 thoughts on “Sometimes I Lie by Alice Feeney”